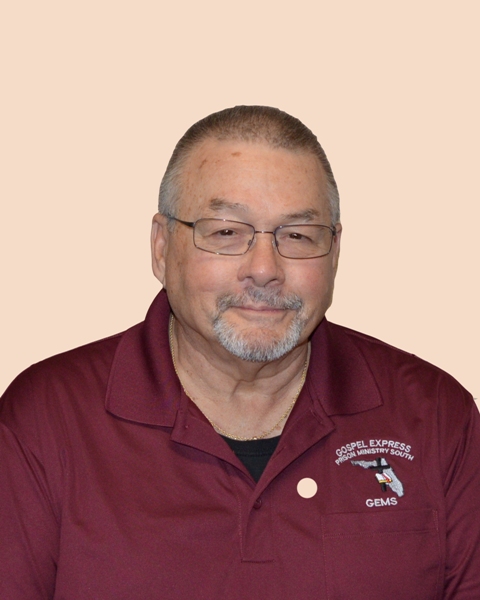 I facilitate every week in 3 prisons.After just moving to Tallahassee in 2015 and being allowed the privilege of joining GEMS in 2016, I was able to expanded to other prisons in the Tallahassee area. Unlike many of the GEMS Chaplains, I have never lived in a prison. When I first began going into prison with Kiaros at Century CI in 2008 , I heard the stories of the incarcerated men and realized those were my stories.. A young life of verbal and physical abuse, government housing, 5 different elementary schools. We moved every time the rent came due while running from bill collectors. When I first went to school, I thought English was a foreign language as I only knew the curse words used toward me. In trouble and first arrested at 15 years old and in adult jail, four more indiscretions before age 30 and I realized the only way to fill the empty hole in me that I was trying to fill up with other things was through Jesus.

I am now federally retirement from the US Postal Service as a Postmaster after 38 years and The State of Florida as The Alternative Dispute Resolution Director for the 1st Judicial Circuit in Pensacola.
I now teach in prison. In Appalachee East and West my class is 60 weeks long and is titled "Peacebuilding and Biblical Conflict Resolution". In Wakulla CI, my class is about 100 hours titled (PIP) Peacemaking in Prison and includes training anger de-escalation through emotional intelligence, peace circles and mediation, plus prison residence trainers to teach this program to other "brothers in blue" in prison. I have been in prison ministry over 10 years. I am a member of Walk On Water (WOW) Prison Ministry as a part of Stabilizing Life that goes into Northwest Florida State prisons for 4 days 4 times a year. 2019 included ACI West, Okaloosa CI, upcoming is Santa Rosa in July and Holmes CI in November.My wife of 35 years and I go to Celebration Baptist Church in Tallahassee.

The captcha you entered is incorrect. Please try again.